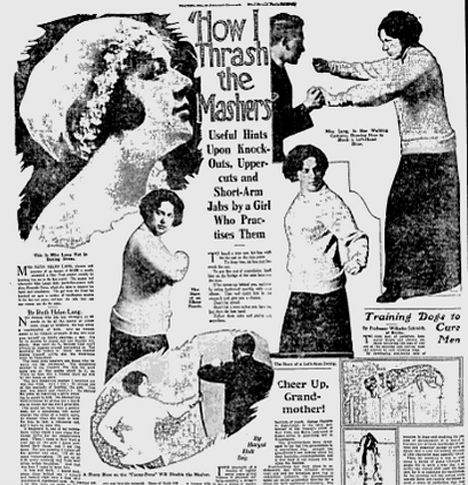 Miss Ruth Helen Lang, nineteen and possessor of an income of $1000 a month, astonished a New York masher recently by knocking him out in the first round. The masher had interrupted Miss Lang’s daily just-before-sunrise walk along Riverside drive, which she takes to improve her figure and complexion. The girl from the Coast has knocked out quite a number of troublesome mashers in the last two years, and here she tells how any woman can do the same.

No woman who has any strength at all needs to be at the mercy of either cads, thugs or mashers, the last being a combination of both. And no woman needs to be without strength if she will only give herself an hour’s exercise a day. It’s up to women to stamp out the masher “nuisance”. Men can’t do it, because they can’t always be tagging around protecting us. The necessity for action is when the masher makes himself active and the resistance must be immediate.

The last dangerous masher I knocked out was last week. How I did it illustrates one of the methods of meeting the pest. This man was proud and vindictive. He showed his pride by resenting a girl’s refusal to speak to him. He showed his vindictiveness by giving me a black eye in return for the two I gave him. He could not have been a gentleman, for a gentleman will never change the color of a lady’s optic, no matter what she does to him. He was in fact, a villainous cad, and I hope he sees this.

It happened in one of my beforehand walks which I take along the Riverside Drive for my complexion’s sake. When I came to New York a year ago all the girls I knew powdered their faces and I did the same. But one morning I rubbed off the powder and said: “I’ll do no more whitewashing. I’ll get up at 5:30 every morning and walk four miles before breakfast.” And that was how I came to meet him.

It was still dark. I heard footsteps close behind me. I turned and looked right into a face with red-trimmed, dissipated eyes. He insulted me. I let him walk close to me. He was watching my right hand. As he came close I swung at him. I caught him on the bridge of the nose. He nearly fell but recovered, came at me and landed on my eye. Then I gave him a blow behind the ear that sent him sprawling. Then he ran.

Now observe that I hit him first between the eyes when he didn’t expect it. When I hit him the second time it was to fell him. I made a mistake.

I should have followed my rule and knocked him out first, but I didn’t think he was so dangerous.

I would advise every woman to get a punching bag and to practice the swift upward swing of the fist known as the uppercut. The quicker and the harder she can make the hit, the better the chance she has of discouraging the masher.

The uppercut is good for close quarters. If the man is at one side, bring him up the arm with a swift circling swing and land on the ear. If the masher comes up behind you and catches your arm bring your elbow back as hard as you can against his stomach. Ten to one, he will release you under the pain. Then turn quickly and give him the knockout on the point of the chin.

If by any chance the masher has gotten in front of you and is holding both your hands, bring your knee up with all the force you can into his stomach. None of them can stand that.

Usually I carry a heavy cane. That is an excellent weapon under certain conditions. I always try to hit the masher upon the elbow. The pain gives him all he wants to think about for a few moments and while he is wrestling with that he is in your hands to knock out as you please.

It is a fact that few of these creatures have as much strength as a woman, decidedly not as much as a well-cared-for woman. They are usually weakened by dissipation or are puny. Where a woman makes her great mistake is in becoming frightened. She does not know what I have just been saying, or she does not remember it. Instead, the fear she had inherited from thousands of cave women who had to be continually watching out for too impetuous and club-wielding males overcomes her even now. She faints, she becomes weak, she does not use her wits nor her strength.

And that is just what the dangerous masher counts on.

To knock a man out, hit him with the fist just outside the chin point.

To drop him, hit him just beneath the ear.

To put him out of commission, land him on the bridge of the nose between the eyes.

If he comes up behind you, suddenly swing backward quickly with your elbow. This will catch him in the stomach and give you a chance.

Don’t hit a man unless you have to, but hit him hard.