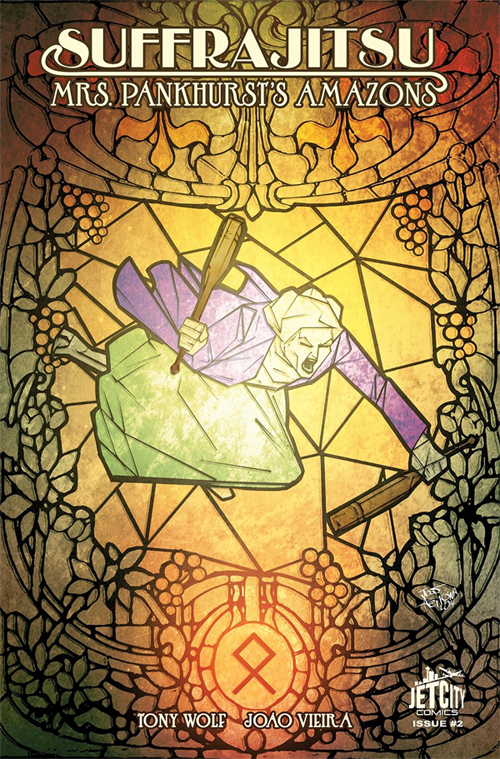 Shocking events propel the Amazons into a daring rescue mission against a sinister enemy, far from the familiar streets of London …

Readers who have purchased the Suffrajitsu series via Kindle from Amazon.com will find Issue #2 automatically downloaded to the end of Issue #1.

We’re pleased to be able to present this interview with John Longenbaugh, the author of the short story The Pale Blue Ribbon which is now available via the Kindle Worlds platform.

“The Pale Blue Ribbon” tells the history of Toupie Lowther, the fiercest of Mrs. Pankhurst’s Amazons, and reveals an altogether different beginning than what you might expect.

A frivolous girl becomes a dangerous and powerful woman in a story of challenges met, swordplay engaged and romance betrayed.”

J.L: For the last few years the focus of much of my fiction has been Steampunk. The Foreworld history hews more closely to the world we know than my own, which features classic Steam tropes like aethereal batteries, airships and mechanical body parts, but it all draws inspiration from the same historical period. Oh, and the fact that my MA from York University is in Turn-of-the-Century English fiction has sure been helpful.

J.L: In keeping with Tony’s dictates, I wanted to make sure that the duel stayed as close to an accurate description of an Edwardian fencing match as possible. While I’ve done a little fencing (and use cutlass in my Bartitsu class), I had to spend a lot of time thinking through the “choreography” of the fight, and using some of the language of fencing while still making the action clear to the general reader.

J.L.: Learning that Toupie Lowther was both an ambulance driver in the First World War and the inspiration for the main character in the classic post-War novel The Well of Loneliness, much to her personal displeasure. She lived an amazing but ultimately very sad life and I am glad to give her a chance for a bit of derring-do in a fictional setting.

Q: In what way(s) would you say the themes of the Suffrajitsu series are relevant to us today?

J.L.: It seems that the gender wars are again heating up, stoked by a discontent among people in the West about all sorts of political flashpoints. In a lot of ways I feel like the issues were clearer in the time of suffragists, because the fight for the vote was an achievable goal. Now so much of the fighting that’s going on seems to be among the various members of the Left themselves, a state that I often find frankly depressing when it’s accompanied by stalled politics and low voter turnout.

I hope that the Suffrajitsu series will encourage people to remember what tremendous sacrifices were made to bring the vote to women, and to remind them that while we squabble about proper pronouns and who has what sort of privilege, women in this country still earn a fractional percentage of what men do in most jobs. There are bigger issues to address and larger fights to wage than the ones that consume us.

J.L.: Write what you love, and write the stories you absolutely have to tell. Read not just for enjoyment, but writers who challenge and intimidate you. You may never write with the imagination of Virginia Woolf or the pristine clarity of Susan Sontag, but don’t settle for just reading the easy stuff. Scare yourself with great writing.

J.L.: The only thing more fun than reading about Bartitsu is getting up on your feet and trying it. If you ever get a chance to do so, I highly recommend it.

We’re delighted to be able to announce that a quartet of Suffrajitsu-inspired stories will soon be available via Amazon’s Kindle Worlds!

Kindle Worlds is an innovative platform that allows licensed “fan fiction” and author collaborations set in various fictional worlds.  Via this platform, authors are now able to create and publish their own stories inspired by the adventures of Mrs. Pankhurst’s Amazons.

Over the coming month, we’ll be bringing you author interviews and notifications as each of these new stories are published:

The Pale Blue Ribbon, a short story by John Longenbaugh

The Isle of Dogs, a novella by Michael Lussier

Carried Away, a short story by Ray Dean

The Second-Story Girl, a novella by Mark Lingane