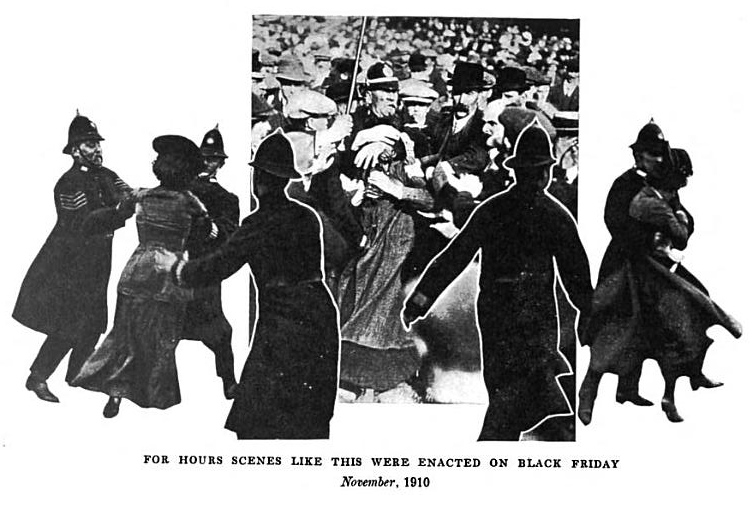 “We have not yet made ourselves a match for the police, and we have got to do it. The police know jiu-jitsu. I advise you to learn jiu-jitsu. Women should practice it as well as men.

Don’t come to meetings without sticks in future, men and women alike. It is worth while really striking. It is no use pretending. We have got to fight.”
– Suffragette leader Sylvia Pankhurst, quoted in the New York Times on August 12th, 1913.

By 1913, the sociopolitical battle that was the British women’s suffrage movement had reached a boiling point. Women had been petitioning for the right to vote for over four decades before suffrage leader Emmeline Pankhurst decided to take radical action against the government, crossing the line from peaceful protest into guerilla tactics of civil disobedience, sabotage and mass vandalism.

Faced with the practice of hunger striking by jailed Suffragette leaders, the government responded with the so-called “Cat and Mouse Act“; an unprecedented amendment to the law that allowed prisons to deal with starving prisoners without resorting to the highly controversial methods of forced feeding. Under the new Act, a starving suffragette could be released from jail “on licence”, allowed time on the outside to recover her health, and then be re-arrested on the original charge.

To keep their leaders free as long as possible, as well as to protect them against run of the mill assaults by irate defenders of the status quo, the Women’s Social and Political Union created a secret society known as The Bodyguard. Numbering 25 or 30 athletic and dedicated women, the Bodyguard was charged with providing security at Suffragette rallies throughout the UK.

The members of the Bodyguard started training in the Japanese martial art of jujitsu, which had been introduced to London some 15 years previously by Edward William Barton-Wright, the founder of the eccentric and eclectic self defence art of Bartitsu. They were trained in a succession of secret locations by Edith Garrud, who was among the very first professional jujitsu instructors in the Western world. They also carried wooden Indian clubs concealed in the bustles of their dresses, to defend against the truncheons of the police. Journalists, delighted by this colourful wrinkle in an already juicy story, quickly came up with nicknames for the Bodyguard, referring to them as the “Amazons” and the “jujitsuffragettes”.

Click here to read about some of their escapades.

Along with their practical duties, the Bodyguard also became something of a symbolic rallying point as the Suffrage movement became ever more radical. They served an important role as agents of propaganda, ensuring that women’s suffrage stories stayed in the newspaper headlines; a necessary and valuable tactic towards winning over hearts and minds.

The outbreak of the First World War, though, put an end to the Bodyguard and to most radical Suffragette activity, as Mrs. Pankhurst decided that “votes for women” would be meaningless if England was conquered by Germany. Instead, she urged her supporters to throw their strengths and skills into supporting the government for the duration of the crisis, including many activities that were formerly considered to be strictly “men’s work”.

In March of 1918, the Representation of the People Act was passed, granting voting rights to some eight million English women.